No one looks forward to an AGM. But it is one of those necessary chores that makes an organisation work. The vice chairman, now chairman, James Green, expertly minimised the pain by efficiently dealing with the elections to key posts (most notably appointing Helen Gosling as new vice chairman and Charlotte Cattell as new secretary), events and financial report. The branch looks likely to retain its reputation for dynamism and enthusiasm. This is one agricultural group where the average age is not 60 and debate really sparks.

With thanks given to the outgoing chairman, David Hurst, the meeting got to grips with the speaker, Tim Breitmeyer, president of the CLA. This final speaker for the winter programme rounded up a year of eclectic technical and political speakers all of which had been informative and stimulating and few escaped healthy and friendly challenge. 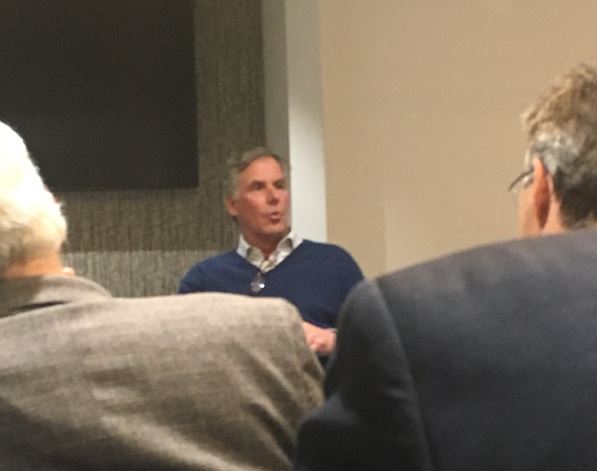 Tim proved a refreshing speaker. We should have expected as much given the CLA’s intelligent input into agricultural policy discussion post-Brexit. The CLA were amongst the first to understand the political mood for agricultural policy post-Brexit (support for public goods not production) and consequently steered policy (towards their view of support for public goods).

The speaker explored the drivers of policy with discussion of the role of agriculture in supply of public goods defined as those benefits not delivered by the market. Environmental offsets looked likely to take on a practical dimension, with developers looking to pay farmers to mitigate environmental loss.

Tim viewed farming’s role in greenhouse gas reduction was seen as being particularly important. Comments from the floor argued for a relaxing of the RHI sustainability conditions. This would allow grass to be used more frequently as a feedstock in AD, producing a new income stream and in doing so retain grassland, and carbon storage that would potentially otherwise be lost.

The phasing out of the subsidy was inevitably discussed. The majority felt that removal of subsidy was positive for the industry and would accelerate adoption of new structures, technology and markets albeit reduce the number of farmers and employees, and be tough in the short-term. It would also put more pressure on consultants to raise skill levels and not accept the status quo and prevailing dogma.

The closest to contention was the current government proposal to decouple payment entirely from land and in particular provide future payments as a lump sum. The implication for land rents is clear but how important was it given the rapid subsidy reduction? New income streams would be needed. Perhaps, the decoupling of payment would just accelerate the search for improvement and acceptance of more risk. Tim expressed enthusiasm for the development of better business skills and benchmarking stimulating discussion of current benchmarking techniques – although there was full agreement for basic input and output cost per unit comparison as being straightforward with unambiguous benefits (supporting Yagro.com a previous speaker who demonstrated the range of daily diesel prices and the value of their cost comparison service).

This was a lively meeting and Tim was enthusiastic for those attending to forward ideas.

We would still like more people to attend our meetings to learn and contribute to the debate. We never turn down ideas.

Thanks are due to both Strutt and Parker and Bidwells who hosted the events in Cambridge.