Members will be sorry to hear of the death of Douglas Brown, formerly Principal of Usk College of Agriculture, and an important figure in the history of the Institute.  Douglas was a member of the Farm Management Association’s Publicity and Information Committee when the Journal of Farm Management was established, in 1967.  By late 1968 this had become the Journal Committee, under the Chairmanship of J.A. Denbin, with Douglas designated as Editor:  i.e. the person who converted the thoughts of authors, modified by the comments of the Committee, into print-ready.  By 1970 one John Nix had taken over as Chair of the Committee, beginning a partnership which would last until John stepped down in 1995. 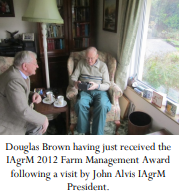 Douglas continued his work until the launch of the International Journal of Agricultural     Management in 2011, having by that time mastered the technology of word processing to   the extent that he provided typeset files to the printer, thus saving the Institute a great   deal of money, and keeping control of the production process in-house.  By that time he     had  served the Journal continuously for 44 years, providing the solid base for its quarterly   production, and occasionally helping Chairman and Committee out of one hole or another.   His manner was direct – blunt when deserved – but laced with a dry humour: exactly what   was needed in keeping more flighty minds on track.  He was a pleasure to work with, and   will be missed.